Today, I’ll be writing about the first arena you go to when you start playing Clash Royale on your mobile phone. Can you guess? I think you may have gotten it right, the name of that place is called the Training Camp arena.

Every player goes through this stage initially, but it can also be accessed at any point in time to practice. Initially the goal of the Training Camp is to make you familiar with the Clash Royale game play and controls by playing against a AI player (or also known as AI Trainer).

The Training Camp is the game’s tutorial mode, it introduces all the player to all of the game’s mechanics and it’s also where the player battles an AI controlled trainer for practice.

[TIP] After the tutorial, the Training Camp can be accessed by pressing the button with a target on it under the Battle Deck. (See screenshot below) 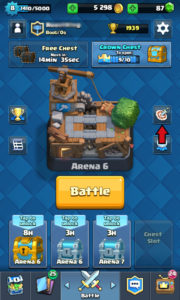 One of the good things about the Training Camp is that no matter how many times you loose in Training Camp there would be no penalties such as loss of trophies, but you also don’t gain any thing from winning… It’s as the name implies; just a place to practice and train your decks.

[INFO] The AI trainer present in the Training Camp changes once you pass a certain trophy thresholds and each trainer has a specific deck, so watch out!

When starting your first battle, the player has six cards in his deck: Archers, Arrows, Bomber, Fireball, Giant and Knight. Some other cards which are unlocked in the Training Camp are, the mini P.E.K.K.A, the Musketeer, the Prince, the Baby Dragon, the Skeleton Army and the Witch.

The game decides which AI trainer you get based on your trophies so For example, the trainer Sneezy fights against 2400+ Trophy players.

If you are looking for tips you could probably use some more Clash Royale battle tips.